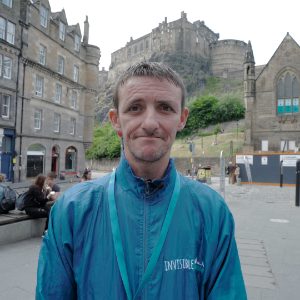 Originally from Glasgow, Sonny moved to Edinburgh when he was 11 to be placed in care where he stayed until the age of 16. He experienced prison, addiction and life on the streets but has been in his own accommodation for several years now.

He spoke for children charity Who Cares Scotland before working for Scottish Social Enterprise Social Bite where he met global celebrities such as George Clooney and Leonardo DiCaprio, talking about homelessness in the UK to them.

In 2016, he became one of Invisible Cities first ever tour guides. Invisible Cities is an award winning social enterprise that trains people who have experienced homelessness to become walking tour guides. They offer alternative, off the beaten track tours in the UK with plans to expand to other countries. (www.invisible-cities.org)

Sonny now wants to develop into a more experienced public speaker. He is passionate about social justice and wants to raise more awareness about homelessness, addiction, the care system and provide an honest picture of other issues in the country.

Sign up to receive insights tailored for the in-destination industry as well as updates on Arival.