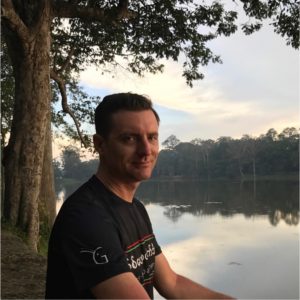 Adam Platt-Hepworth grew up in the Blue Mountains outside Sydney Australia, he spent his youth outside on bikes and in the forest, but didn’t travel overseas until early twenties. Initially he pursued a career in banking, specifically business banking for the SME market in Melbourne. In 2006 in his mid-twenties, he was inspired by a friend to join him at a start-up, Grasshopper Adventures. It started out as a niche product in multi-day bike touring, they launched their first day tours and activities location in Bangkok in 2008. Since then, the day tour business has spread to nine locations in four countries, and the multi-day tour business has gone broad market, now offering achievable, active adventures throughout Asia. Adam currently lives in Siem Reap Cambodia with his family and is currently the sole owner of Grasshopper Adventures.